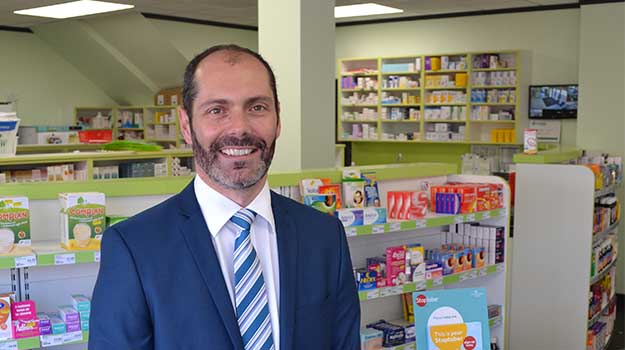 When Mr Badenhorst left South Africa for a community pharmacy role in the UK, he wasn’t planning on making it a long-term visit. “It was never my intention to stay in Britain,” he tells C+D. “I fancied a change, and wanted to save up to buy a house [in South Africa]. But 20 years later, I’m still here.”

In that time he has graduated from the University of Sunderland, and risen to become managing director of Whitworth Chemists, an independent chain of 35 pharmacies across the north of England.

The early appeal of pharmacy

A career in pharmacy first appealed to him when he was just 14. “I wanted to have extra pocket money, so I had a holiday job at a community pharmacy in South Africa doing shelf-stacking and till work.”

That pharmacy experience sparked an interest in science, particularly pharmacology and medicinal chemistry. “It felt natural to talk about medicines,” he says. “And I also liked community pharmacy, where you see people from different backgrounds with no discrimination, and where the pharmacist is a trusted individual who is central to the community.”

His strong academic performance at school enabled him to take a four-year pharmacy degree at North-West University in South Africa. On graduating, he spotted an advert to recruit community pharmacists from overseas to join the UK chain Moss Pharmacy – which merged with Alliance Boots in 2006. He applied and then spent year of pre-registration training as part of the overseas pharmacist programme at the University of Sunderland.

Even though he was achieving professional success, he admits he found the first few years in the UK “really tough”. “It was the first time I’d had to do exams in English, which was my second language,” he says. “I had few friends and had to establish myself in a country where I hadn’t grown up. Many times I thought: ‘What am I doing here?’ It was sheer determination [that made me stay] because I wanted to show myself I could succeed.”

Mr Badenhorst worked for Boots from 2002, progressing from branch manager to area manager. Here he was inspired by his regional manager, “who saw the potential in me and gave me projects to encourage me to take on management roles”.

In 2009, he saw an advert for a superintendent pharmacist at Whitworth Chemists. “It said: ‘Fancy a new challenge?’ [And] I did.” He got the job, based in Scunthorpe, and says the timing was perfect for his career development.

“I was able to take all my experience, including multi-site management and leadership, and bring it to Whitworth Chemists.” He was responsible for legal and clinical operations within the business and in 2015 he was promoted to managing director, while retaining the superintendent pharmacist role.

As managing director, he “ensures the business remains viable by making good decisions”. He also looks at Whitworth’s corporate social responsibility through its impact on local communities, and helps to organise fundraising work for charities such as the Air Ambulance Service.