How a pharmacist received an MBE for helping people access benefits 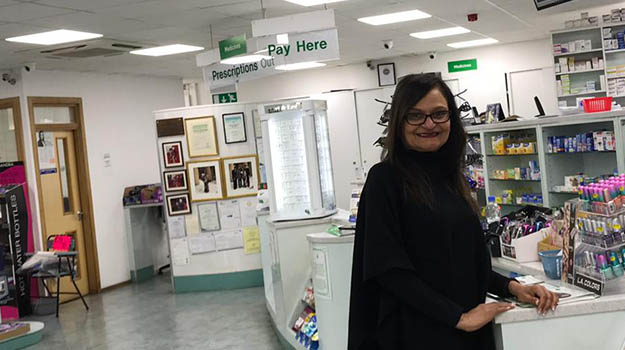 Patients who visit superintendent pharmacist Lila Thakerar’s Shaftesbury Pharmacy in Harrow will see photographs of her shaking hands with the Queen on her notice board. In fact, Ms Thakerar received a Member of the British Empire (MBE) order in 2012 for her community services in Harrow, which extend far beyond the typical pharmacist-patient relationship.

Ms Thakerar, who was brought up in Fiji, became the country’s first female pharmacist in 1979. She then moved to Australia, where she met her future husband, an English locum pharmacist. They settled in the UK in 1984 and nine years later, the couple bought Shaftesbury Pharmacy. Over the years, Ms Thakerar has built a comprehensive suite of public health services, with consultation rooms for diagnostic testing, pregnancy and stop smoking services, along with private areas to accommodate patients on methadone and needle exchange programmes.

Her accomplishments include raising £27,000 for children born with a cleft lip to receive surgery and advising people with communication difficulties on how to access support. She even gave up her free time to help feed homeless people in the local Asian community; many could not speak English, but Ms Thakerar helped guide them through the social services.

One of her passions is helping people handle the bureaucracy around accessing benefits. “The paperwork that goes with applications for financial support is so overwhelming that as soon as the package arrives in the post the size of it is enough to put some people off. I’ll sit with them to complete whatever is necessary in the application forms, send off the paperwork and follow up until a decision is made.”

Such is her commitment to fundraising that when she tripped over a wire at a charity event and fractured her arm, she declined the advice of medics to go to hospital so that she could give her speech as planned. She was president of the charity at the time – community service organisation Harrow and Pinner Lions – and didn’t want to let down the 350 attendees at the hotel. That determination “translates to how I feel about patient care”, she says.

Ms Thakerar was informed of the MBE by a letter she assumed was junk mail. “The envelope had ‘On her Majesty’s Service’ on it – I thought it was probably political propaganda. It asked if I wanted to accept. I said to myself, ‘Duh, of course I’m accepting!’” When news of the accolade became public, Ms Thakerar found herself being invited to give presentations at local organisations. “Never in my wildest dreams did I think an ordinary community pharmacist just helping people in need could be recognised in this way.”

But she’s not done with helping patients yet. To fit in the increasing demands of her profession while aiming to maintain a happy working life, Ms Thakerar rises early for a 50-minute walk before breakfast. “I make my day longer than average as I prefer for it to be organised, and to get my list of things ‘done and dusted’,” she says. To those starting out in community pharmacy, she says it’s important to “have passion” and that “it’s not all about pound signs – it’s about that sense of satisfaction of looking after patients”.